Hallo Everyone!
I am SapphieChan, and as an FA artist it is very hard to know what all you lovely people are thinking of when it comes to your avatars!
So here I am to propose, that everyone sends me all their suggestions!! And Hopefully they are all to be made within the foreseeable future!
So please, one and all tell me your suggestions when it comes to what you think the FAs are currently missing on site!
Please post all your suggestions here! I will not be responding to PMs Thank you!

Note From Lucille: This is not a discussion thread. It is for posting ideas only. This way the art team can easily browse without having to sift through posts lacking suggestions.

Things that will not be done:
Copyrighted items (Anything based off of another site's items or art)
Religious items
Anything inappropriate (Please try to keep it sfw)
Edits to existing items
Color suggestions
Companion items (Pet OR human)
Price items depending on request (You can't ask for it to be in DS or WS)
Items based off of your character (Any art made for the site belongs to the site)
Anything that goes against the TOS
Blue
Donor
About 5 years ago
Posts: 25
∞Permalink

I would personally love some magic items.

Rhowyn
About 5 years ago
Posts: 2762
∞Permalink

Just a note, this is not a discussion thread. It is for posting ideas only. This way the art team can easily browse without having to sift through posts lacking suggestions.

I have added this note to the first post.
"I, Sesshomaru, have no one to protect." - Sesshomaru, Swords of an Honorable Ruler

"I don't understand a word you say, but I'll defend to the death your right to confuse me."
- Captain Hawkeye Pierce
ml1201 (f)
About 5 years ago
Posts: 573
∞Permalink

Visual Kei themed clothing, things like the jackets, pants and gloves, I love those trench coats!

Gothic Lolitia themed items, all that frilly lace and ruffles are really pretty!

Also, parasols would be really cool too if it is possible.

Gothic Medieval clothing, like the capes, cloaks and dresses. The shirts would also be neat. :3

Pirate themed clothing, with the coats, sashes and what not, not to mention cutlasses! I love my pointy toys.

Tuxedo suits for both guys and the ladies (who said ladies had to wear dresses?), butler and governess themed outfits.

Spellcaster robes and other such outfits, can we have glowy eyes with this too? It would make for a really cool spell casting effect.

Crystal balls, magic circles, runes that are tattoos or glowing symbols that are floating around. Beards, mustaches and other face hairs for the male avis, which would be coo if we wanted to make a rough-n-tough looking guy or someone that looks like a dwarf. Almost forget spell books! Both opened and closed version if possible.

Horns, antlers of many shapes and sizes, an example being ram horns and goat horns, extra pointy ears (basically ones that are bigger than the ones currently on the avi that we can slap on).

Tails, ones like the unicorns, a lizard/dragon kind of tail, animal tails like lions, tigers and wolves. Animal ears like bears, mice, dogs, cats, you get my meaning.

Also more styles of wings, like little cutesy ones that look like you can't fly with them, multi-wings like a seraph angel, and don't know if this is allowed but also have the wings as being able to be purchased as left/right instead of a set to allow more customizing with the avis (just as a suggest, can ignore if not applicable).

Chain bracelet rings (This is just a reference so that you know what I mean), Egyptian styled necklaces, like the ones that curve around the whole neck.

Indian themed clothing (as in from India not Native American) and some of their jewelery. I would love to have that little gem thing they get on their foreheads, or that little crown dropping thing they have (no idea what the name is).

Greek/Roman inspired clothing, like some maybe themed after their myths and traditional clothing (meaning maybe something themed after a chimera/Pegasus/hydra/Medusa/etc). 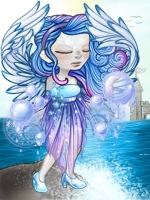 Tempest
About 5 years ago
Posts: 520
∞Permalink

I think a Wild West theme would be fun! We could do Saloon outfits for the ladies and something like a "gunslinger" outlaw type or an old western sheriff for the guys.

Pics for references and examples can include: (using links to help loading times...)

dawnreader
About 5 years ago
Posts: 97
∞Permalink

I'd like more foot wear for the guys, like boots, sandals, sneakers, that kind of thing since there's only one pair for the guys. ^^;

kimbeloo
About 5 years ago
Posts: 25
∞Permalink

I'd like a ballerina or dancer type outfit and some harem girl style silks
Butterfly wings and antennae would be amazing
How about Tiaras or those elven hairpieces like in Lord of the Rings
Asian Geisha style kimono, makeup and hairstyles with the fancy hair sticks and fans to hold
How about a mermaid outfit! Seashell bras and fancy fishtails and oceanic jewelry!
Which brings me to Hawaiian hula dancer grass skirts and little bikini tops and flowered leis
I'd also love tattoos especially anything with a dragon theme.

As a body modification freak, piercings & tattoo's would be amazing.
Not sure how the inking would work though, I guess just generic designs & flash stuff?

Nimrodel
About 5 years ago
Posts: 2005
∞Permalink

Some thoughts I've had:

Foreground:
Flowers (growing naturally and/or potted), butterflies, falling flower petals/snowflakes/leaves/rain, leaves on the ground, rocks/tree stumps/other stuff fitting the scenery of the background (with and without snow to match seasons?)

Wyverna
About 5 years ago
Posts: 17
∞Permalink

MonoPeggy
About 4 years ago
Posts: 126
∞Permalink

today i have an idea for FA suggestions lol i think we need more rainbows... a background, a pair of stockings like the shamrock stockings that are rainbow... oh and stars... like the kinky cupid heart pendant only a star maybe earrings and toe covers and a belt that has a star buckle.
Maro (f)
About 4 years ago
Posts: 24
∞Permalink

I'll be honest I just keep thinking vve need more pants and shoes , maybe a fevv more shirts. Legvvarmers is definitely a thing I'd like to see as vvell.


edit; also some tails and a fevv more kinds of vvings vvould be great ^^
dawnreader
About 4 years ago
Posts: 97
∞Permalink

going to purloin AllieKat's idea and extend the stars idea: we could also have crescent moon items and diamond-shaped ones.
I also play Valley of Unicorns, Magistream, Fableden, Aywas, and Dragcave! I'm dawnreader pretty much everywhere.
Nyathearai
Donor
About 4 years ago
Posts: 6
∞Permalink

But I see a tonne of awesome suggestions here, so I'll leave it at that... For now... Muhahah ;o)

My avatar is a redhead, her hair will usually clash with her outfit.

Tempest
About 4 years ago
Posts: 520
∞Permalink

So while making my current avi I decided that a romantic background, rocking stage show and the sunset beach just don't fit her attire....So I am here to suggest perhaps a woodsy or forest type background!

Sorry I've had a lot of coffee

Berlin
About 4 years ago
Posts: 47
∞Permalink

my random ideas:
-an army jacket
-or any type of jacket, I cant seem to find any... maybe that's just me, though

(sorry I may have a thing for camo...)
-a longer, chain like necklace.
-or any longer necklace, I can only find short ones (again, might just be me)

I think that's all for now

Spectrum_Wings
About 4 years ago
Posts: 17
∞Permalink

Just gonna pop some of my random ideas as well.

Hopefully I won't name too many things already in the shops.

- Watches
- Headphones
- Slings, backpacks, the like... Dunno I just have a thing for having a place to store trinkets.

I don't know if other people like to dress up as unicorns/dragons, but I do.

That's all I can think of for now. Cx
Eyeliner is now my new obsession.

I would loooove a couple of Kigurumi, which is what Spectrum was talking about with the dressing up as dragons, etc. Cat, red panda, normal panda, etc. Etc.

ETA : I would still really really love an arrow or quiver to go with the bow!

My avatar is a redhead, her hair will usually clash with her outfit.

dawnreader
About 4 years ago
Posts: 97
∞Permalink

You know what's getting to me? I'm working on a new outfit for my FA (yay for having moniez) and I need sandals. We don't have any sandal options that I can see. They would be a nice addition.
I also play Valley of Unicorns, Magistream, Fableden, Aywas, and Dragcave! I'm dawnreader pretty much everywhere.